Do you watch Doctor Oz? He's one of those television figures like Oprah or Dr. Phil that everyone has an opinion about. I work with a girl who's a die hard Dr. Oz fan, almost every day she says you know Dr. Oz says you should have this or that. Last week she told me he had a show on Super Foods, funny I was thinking I'd just watched a Dr. Oz show on Super Foods. So I said, he said blueberries, right? I know that's what he said on the show I watched. She said, no he said Chickpeas!

This was a day or two after I bookmarked this recipe. Regardless of whether or not you like or believe Dr. Oz, give this soup a try. It's a delicious version of tomato soup. The rosemary adds a nice earthy fragrance to the tomatoes and the chickpeas give it some substance. I brought my rosemary plant in for the winter and so far it's doing pretty well. I've found the fastest way to chop rosemary is to snip it with kitchen shears, much quicker than trying to chop with a knife. I almost always have some homemade chicken stock in the freezer, so I used it in place of the veggie stock.

I loved this soup and will be making it again, for me. Much as I tried to convince Tim the chickpeas were the "meat" in this soup, he said the chickpeas just weren't working for him. 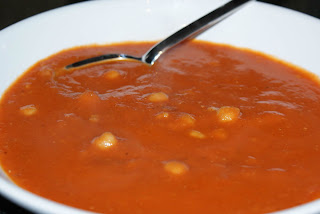 Courtesy of the Taste Space

1. Warm the olive oil in a large soup pot over medium-low heat, and add the garlic and rosemary. Cook for a minute or two, and then add the tomatoes, sugar, salt, a few grinds of pepper, roughly half of the chickpeas, and the stock. Bring to a boil over high heat; then reduce the heat to low and simmer, partially covered, for 20 minutes.

2. Remove the soup from the heat to purée. If using an immersion blender, purée the soup directly in the pot. Otherwise, wait a few minutes, until the soup cools; then purée it in batches in a blender or food processor and return it to the pot. Add the remaining chickpeas, and warm the soup over medium heat. Serve warm.

I am linking this to Foodie Friday at Designs By Gollum and Souper Sunday's at Kahakai Kitchen!