It's the fifth Monday of February and that brings an extra Secret Recipe Club reveal.  When there is a five week month, SRC features an extra reveal with a theme.  February's theme is Leprechaun's and Bunnies.

For this special SRC reveal, I was assigned A Day in the Life on the Farm.  A little about Wendy..... "My husband and I were both police officers in the third largest city in our state.  When we retired we moved as far away from the hustle and bustle as we could, landing in a small town of approximately 4000 people and buying a house on 12 acres. I enjoy scuba, travel, reading, games, hiking, entertaining, cooking, quilting and painting."  Stop by Wendy's blog and browse her wonderful collection of recipes and other posts.

I had no trouble choosing my recipe for this week's reveal.  Wendy's post for this soup was a posting for the group Food Fix.  In this group, a blogger chooses a movie and the post includes a review of the movie, along with a related recipe.  The movie Wendy reviewed was The Quiet Man, starring John Wayne.  John Wayne was the favorite actor of my late father and this movie was one I recall him watching frequently.   If that alone wasn't enough to convince me to choose this recipe, the original recipe was written by Crescent Dragonwagon.  Crescent is a food writer and former inn owner in one of my favorite little towns, Eureka Springs, Arkansas.

The wintertime price on the leeks at the grocery store was too rich for my blood, so I omitted them.  Although Kerrygold Cheddar Cheese is amazing, the store brand tasted great to me.  If you like blue cheese, do sprinkle some on top of the soup, it really enhances the flavor.  This hearty and delicious soup, served alongside a salad and crusty bread, makes a great weeknight meal. 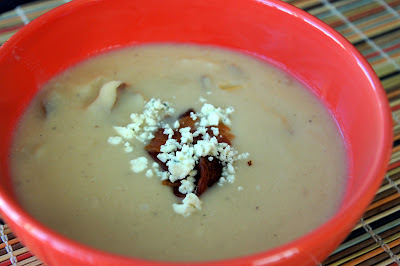 Irish Potato Soup with Cheese and Red Ale
adapted from a recipe by Crescent Dragonwood as found on Relish.com

Recipe Courtesy of A Day in the Life on the Farm

Melt 2 T. of butter in a stockpot over med heat.  Add onions, celery and leeks and cook for about 8-10 minutes until softened.  Add the potatoes, ale and chicken broth.  Season with salt and pepper and bring to a boil.  Cover, reduce heat and simmer until potatoes are tender, about 45 minutes.

Melt remaining 2 T. of butter in a medium saucepan.  Whisk in flour until smooth. Cook for a few minutes until flour smell is gone, stirring constantly.  Gradually whisk in the milk until hot and thickened.  Add cheese and stir until melted.

Stir cheese mixture into the potato mixture until combined.  Warm over very low heat for 10 minutes not allowing the soup to boil.  Ladle into bowls and garnish with the bacon and blue cheese, if desired.

An InLinkz Link-up
Posted by Julie at 11:00 PM 6 comments

I was looking for something different to take to the Super Bowl party we were invited to.  I wanted something besides those go to apps for Super Bowl.  I ran across this recipe from Giada and thought it would be perfect. 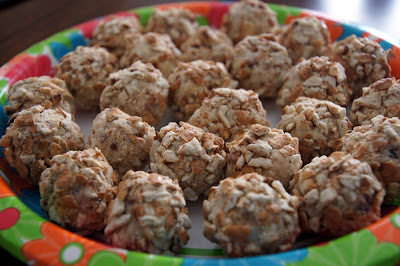 Place the bacon in a medium skillet and heat over medium heat. Cook the bacon until almost entirely crispy, about 10 minutes. Add the shallots and cook for an additional 2 minutes. Using a slotted spoon, scoop the bacon mixture into a medium bowl. Add the cream cheese and gorgonzola and mix well with a rubber spatula. Using a 1-tablespoon ice cream scoop, scoop little balls of the cheese mixture and roll them between your palms to smooth. Place on a plate, cover and refrigerate for at least 1 hour.

When ready to serve, allow the balls to sit at room temperature for 5 minutes. Mix together the pretzels and chives in a small bowl. Roll the truffles in the crushed pretzel mixture and serve.
Posted by Julie at 2:10 PM 4 comments

Last summer one of my neighbors brought me back a batch of beautiful Michigan cherries.  Having made this flavored vinegar earlier this year, I decided to use a few to make cherry vinegar.  What a beautiful color.  Fruit flavored vinegar is easy to make.  I combined the cherries and balsamic vinegar and let them sit in the fridge for a few weeks.

I've gotten into the habit (a good habit) of making homemade salad dressing.  I made a simple vinaigrette with this cherry vinegar.   I chose a simple  recipe so the cherry vinegar could be the star.  It's so hard to get a good picture of dressing!  :-) 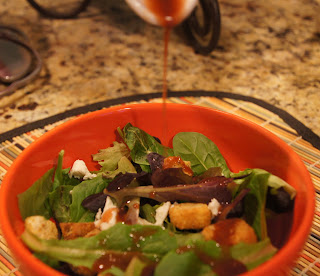 Combine 3 parts of your favorite oil with 1 part of flavored vinegar.  Add shallots and some dried herbs.  I make this a few hours before dinner so the flavors have a chance to develop.

For our first Secret Recipe Club of 2016, I was assigned ButterYum.  Patricia, says, "I'm of British and Italian decent, the mother of 4, and I've been married to my wonderful husband for more than 25 years. I had always dreamed of going to culinary school, but reality hit when I married and started a family, so I took matters into my own hands and taught myself to cook and bake from scratch. I started with zero kitchen skills and now I teach cooking classes!"  How fun is that?!!

After enjoying a tour of Patricia's blog, I chose these Slow Cooker Caramelized Apples.  As a child, I remember enjoying baked apples with brown sugar.  This recipe is an even more delicious version of those baked apples!  I love that these can be made in the slow cooker, which is perfect for simmering these in the brown sugar and butter.  On the stove, they would require a constant stir and you would risk burning.  Served warm alongside a scoop of vanilla ice cream ...  yum! 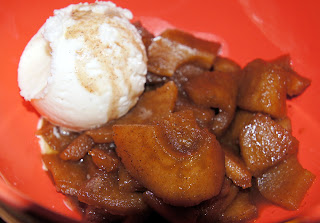