For the past several years, I've been debating whether or not to purchase a pressure cooker.  I would see recipe posts using a pressure cooker and say maybe I should get one?  Then I would think I have no more room in the kitchen and most recipes seemed to be ones I could make in my crock pot.

Before, I start let me say this isn't a sponsored post, just my own thoughts.  If you're an Amazon Prime member, you're familiar with the Prime Day sales from a couple of weeks ago.  One of the items on sale was the Instant Pot, prior to Prime Day, I had never seen an Instant Pot.  The Instant Pot is touted as Pressure Cooker, Slow Cooker, Rice Cooker, Yogurt Maker and more.  On Prime Day, the cooker was on sale for $69.99.  Okay so now I was thinking, if this pot really can be my rice cooker and my slow cooker, maybe I do have room for this in the kitchen??  I did some reading and everything I read was this was the best gadget since sliced bread.  I was hooked and ordered one.

Two days later when the Instant Pot arrived, Tim and I unpacked it and attempted to steam some carrots for dinner.  It was quite intimidating at first, lots of steps and buttons and in the back of my mind, all I could think of was the old pressure cookers that would blow up.  Really I don't want to have this blow up in my kitchen?!!!  Our first attempt at the steamed carrots was a bit of a bust because I didn't realize time had to be based on the cooker coming up to pressure, so 4 minutes is really 14+ minutes, allowing for the 10 or so minutes for the unit to come up to pressure. 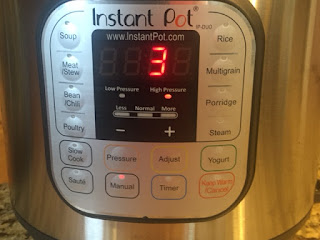 Once I became familiar with the ins and outs of the Instant Pot, I was over the fear of it blowing up and ready to experiment with what I could make.  Ten days or so later, the Instant Pot is my new best friend.  I've made pasta and meatballs, chicken breasts for chicken curry, chicken broth from a carcass (which finishes in 30 minutes!), lentils, corn on the cob and hard boiled eggs.

Hard boiled eggs are just one of many things  Instant Pot users rave about! Thinking I would make egg salad for lunch this week, I decided to give them a try! The reviews are correct, if you've ever struggled with peeling eggs, you'll agree.  These eggs peeled perfectly and were beautifully cooked!  Yep ... I'm on the bandwagon (albeit a little late, the Instant Pot has been available for a while),  I love the Instant Pot!!! 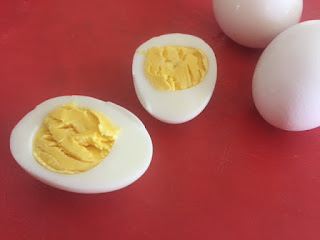 If you're looking for a dinner for the kiddos or the grandkids, give this one a try. I took the easy way out and used a store bought pie crust. Tastes just like a cheeseburger without the grill. 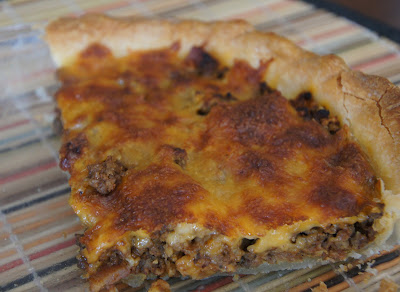 Preheat oven to 400 degrees.
Brown ground beef, onion and bacon until no pink remains. Drain well. Remove from heat and stir in bread crumbs, mustard, barbecue sauce, ketchup, Worcestershire and pepper. Place mixture in prepared pie crust.
In a small bowl, combine cheese, milk and egg. Spread over meat mixture.
Cover the edges of the pie crust with foil or a pie shield to prevent over browning. Bake 15 minutes, remove foil and bake an additional 15 minutes.
Posted by Julie at 5:18 PM 0 comments

Can you believe it's July?  This year, like all of them, is flying by.  The second Monday in July brings us Secret Recipe reveal day!  Not familiar with this fun club, you can fine the details here.  This month, I was assigned WhyIamnotskinny, love that blog title!  Maxine, the blogger behind WhyIamnotskinny is a South African food blogger living in Brussels (Belgium).  She says, " I am definitely not skinny, have a REAL appetite and am pretty sure that there is a 2nd stomach reserved for desserts and sweet treats. Sharing a home with HIM (aka the wonderful husband) and our first child (born 2015 – aka Little Miss) – you can follow me on my journey through recipes, restaurants and all round love of food."  The idea of a second stomach could most certainly apply to me!

I enjoyed my tour around Maxine's blog.  Fun and interesting to see the ingredients with different names.  Courgette is what we call zuchinni, brinjal is what we call eggplant.  While I thought about choosing a savory recipe using one of these ingredients, I settled where I do most months with dessert.  Whenever I can, these sweets go to work with Tim for his monthly food day.  Otherwise, I really would need that second stomach. I chose to tweak Maxine's Lime and Beer Cake recipe just a bit and make cupcakes.  Of course, we gave these a try before sending them to work and enjoyed the light texture and hint of lime! 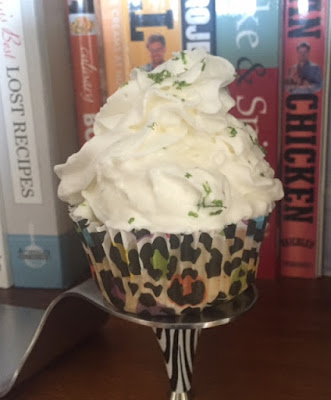 An InLinkz Link-up
Posted by Julie at 11:00 PM 1 comments

We've had a really HOT late Spring and early Summer in Nebraska. One particularly hot Saturday when we were having friends for dinner, I wanted to find a dessert that didn't require the oven or the stove top.  Normally when in search of a dessert that doesn't require cooking, I choose a trifle.  With the hot weather, I really wanted something cold.  Ice Cream!!???  A quick search on Pinterest and I was drawn to this one ...  hot fudge?  Yes, please!!!

Layers of ice cream bars, hot fudge, caramel, whipped topping, and chocolate chips make this tasty treat look much more difficult than it really is.  My dinner guests were so impressed, they thought I worked for hours to create this.  I was quick to reveal just how easy this dessert is to make but that's not the best part!   This ice cream cake is sooooo good! 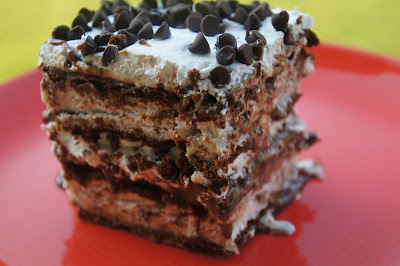 Ingredients
Directions
Notes
You can make this up to 3 days ahead of time and frozen, tightly covered. Let thaw for about 5-10 minutes before slicing.
Posted by Julie at 6:37 AM 4 comments