Our friends Karen and Larry came to visit for New Year's. On Friday afternoon, we went to see Little Fockers. My son Justin and his girlfriend Lily worked on the movie. When Tim and I were in Los Angeles for Thanksgiving in 2009 we were lucky enough to see the heart attack scene being filmed. It was fun to see the scene on the big screen! 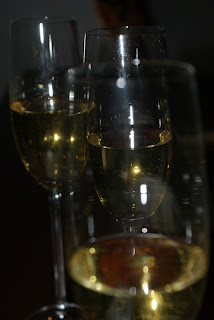 We decided to be safe and stay in on New Year's Eve. The final step in our main course was grilling for 10 - 15 minutes. Tim, being a Minnesotan who will grill in cold weather, agreed to grill for me! He scooped out a path and brushed the snow off the grill. Thanks, Tim! You helped make our New Year's dinner special! Here's our menu!

Mixed Grill with Spicy Bourbon Sauce
Potato Gratin with Rosemary Crust
Honey Orange Glazed Carrots
Lemon Pots de Creme
One of my food blogging goals for 2011 is to entertain more. This is the perfect menu for entertaining! I will be making these recipes again soon! 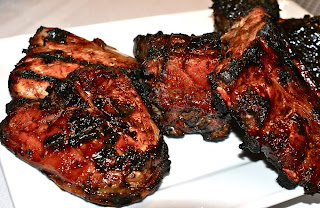 When I read the recipe for the mixed grill sauce and saw it contained 3 tablespoons of chili spice, I was concerned. No need for concern, it wasn't spicy at all. I am sure whatever chili sauce you use makes a difference in the spice level, too. I halved the recipe but ended up making a full recipe of sauce. I am glad I did, it was so delicious. 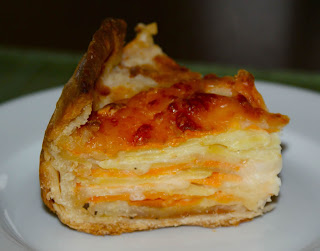 Since there were only four of us, I made the gratin in a 7" springform pan, the size was perfect. The flavors of the two potatoes and gruyere cheese were perfect together.

Not much to say about the honey glazed carrots except they were melt in your mouth delicious. (In the rush to get photos and serve dinner before it was cold, I thought we snapped a shot of the carrots but apparently not.) 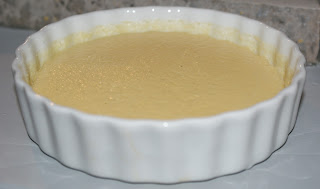 After a fairly heavy dinner, the lemon pots de creme were the perfect light finale! I thought the amount of lemon in these was just right. Tim said he thought they were too lemony. I think it depends on whether or not you are a big fan of lemon desserts.

What's your favorite menu for entertaining?
Posted by Julie at 7:00 AM