I get home late two nights a week and try to do slow cooker meals on those nights. It's been really cold here, perfect soup weather. I was thumbing through Not Your Mother's Slow Cooker cookbook looking for a new soup to try. When I saw the French Onion Soup, I was hooked. French Onion Soup in the slow cooker, seriously?

If you've made French Onion Soup you know it's an afternoon project. I was excited to think I might be able to make French Onion Soup while I was at work. I did some searching on the internet and found a few other slow cooker French Onion Soup recipes. With the recipe from Not Your Mother's Slow Cooker cookbook recipe as my inspiration, I created my own version. Most recipes call for dry white wine, cognac or brandy, I decided to use leftover champagne. I think it added a wonderful depth of flavor. The recipe in Not Your Mother's Slow Cooker cookbook cooks the onions for 10 - 12 hours, adds the wine and broth and cooks 1 -2 additional hours. I felt the soup would have a better flavor if the broth cooked longer. I also thought the original recipe was lacking in some spices, so I chose to add bay leaves and thyme.

Give this soup a try! It is almost, if not as good, as French Onion Soup cooked on the stove. 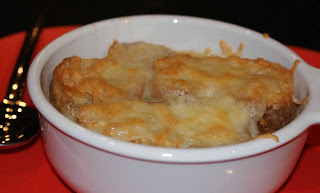 1. Combine the butter and oil in the slow cooker and cover. Turn the slow cooker on low and allow the butter melt and the oil to heat which you slice the onions.
2. Peel the onions, slice in half lengthwise, slice thinly into half moons. You should have about 4 cups of onion slices. Add them to the cooker. Sprinkle the salt and sugar over the onions. Toss with oil, butter, sugar and salt to coat them. Cover and cook on HIGH for 1 hour, stir. Turn the temperature down to LOW and cook until they are dark brown and caramelized, but not burned. (I cooked mine about 5 hours.) They will have cooked down to a fraction of their original volume and most of the liquid will be evaporated. If you are home, stir the onions once or twice during the cooking time to help them cook evenly. (I didn't stir mine after the first hour and they browned nicely.)
3. When the onions are done, add the wine, broth, bay leaves and thyme. Cover and continue to cook on LOW 4 -5 hours.
4. When you are ready to serve the soup, stir in the cognac. Add salt and pepper to taste. Toast the bread. Preheat the oven to 350. Put the bread slices on a baking sheet and bake until toasted, 10 - 15 minutes. Increase the temperature to 400.
5. Pour the soup into 2 ovenproof soup bowls; place on a baking sheet. Drop a bit of the cheese into the soup. Top each bowl with bread. Pile the rest of the cheese on top of the bread. Place the baking sheet in the oven and bake until the cheese is melted and browned, about 10 minutes. You can also put it under the broiler for a minute or two to help brown the cheese. Serve immediately.

I am linking this to Foodie Friday and Souper Sundays!
Posted by Julie at 7:00 PM