Are you ready for a perfect winter recipe that isn't soup. Who's your favorite Next Food Network Star winner? Mine is Melissa d'Arabian. Although, I question how she can make some of these dinners for ten dollars, I love the her show Ten Dollar Dinners. I saved this recipe after watching her prepare this dish on an episode last winter.

I made a couple of minor changes to the recipe. I omitted the prunes, mainly because I didn't have any. I added potatoes, so as to have a complete meal when I took it out of the oven. If you have an afternoon to devote to making a fabulous dish, give this one a try, you won't be sorry. 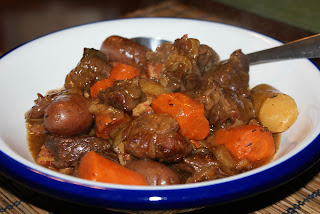 Directions
Preheat the oven to 325 degrees F.
In a large Dutch oven over medium-low heat, add the bacon and cook until it renders its fat and almost becomes crispy. Remove it with a slotted spoon to a plate. Add the onions, season with salt and pepper, to taste, and cook over low heat until they are deep in color and caramelized, about 30 minutes.

Remove the onions to a plate, leaving as much fat in the pot as possible. Add the vegetable oil and mix it with the bacon fat. Raise the heat to high. Season the beef liberally with salt and pepper and sear, in batches, until nicely browned on both sides.

Once the meat is browned, add the first batch of meat back to the pan along with the onions, carrots and bacon. Sprinkle in the flour and stir. Cook for 1 minute before deglazing the pan with the beer. Add the remaining ingredients and bring the mixture to a simmer. Cover the pot and put it in the oven to braise until the beef is tender, about 2 hours. Remove the pot from the oven and transfer the pot roast to a serving dish.

I am linking this to Tasty Tuesday's, Tempt My Tummy Tuesday and Tuesday's at the Table.
Posted by Julie at 7:00 AM