Do you use canned black beans or do you make your own? Since canned beans can be as much as 1.00 something a can, I decided to make my own. After doing some research, I settled on cooking them in the Slow Cooker. I soaked the beans for about 6 hours and cooked them for about 4 hours on high. The interesting thing was, my black beans became brown beans. It seemed most of the dark color was either in the water from soaking or in the water from cooking. Has anyone else experienced this?

I've seen quite a few recipes for soup with black beans and sweet potatoes or butternut squash. With these recipes as inspiration, I created my own recipe. This recipe makes a delicious but very spicy soup. I love the flavor from the addition of just a touch of cinnamon. You could easily add chicken or even some sausage to this soup. 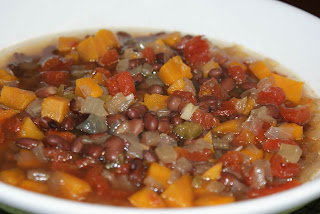 I am linking this to Tasty Tuesday's, Tuesday's at the Table, Souper Sunday at Kahakai Kitchen and Tuesday Night Supper Club.
Posted by Julie at 6:00 AM