Does chocolate pudding remind you of your childhood? It's one of my earliest kitchen memories. My mom would make Jello Chocolate Pudding for dessert. I remember when I was maybe seven? she let help me stir the pudding on the stove. I don't remember it seeming to take as long to cook as it does today!

I love dessert! It's my favorite food group! I make a lot of desserts from scratch. Pudding, however, I don't think I have ever made from scratch. When I saw this weeks SMS recipe was Chocolate Pudding, I knew I wanted to participate. I also realized pudding is on my Top 50 list, so apparently this isn't the first time it occurred to me I'd never made pudding from scratch.

I made 1/4 recipe and ended up with 2 five ounce ramekins. The recipe called for checking pudding after 45 minutes. To be safe, I checked after 40. Was it done? It didn't appear soupy but didn't really look done. Melissa suggests using an instant read thermometer and if it reads between 150 - 155, it's done. Okay, 152! Interesting though the top of my pudding doesn't appear smooth like I would expect it to look. I wonder if I cooked it too long.

The pudding is denser and thicker than I expect a pudding to be. The flavor is nice, with just the right amount of chocolate. I liked it but I didn't love it! 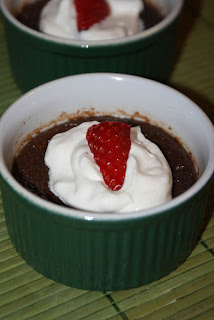 Thanks to Leslie of Lethally Delicious for choosing this week's recipe. You can find the recipe on her blog. If you want to see the other SMS baker's pudding, you can find the links to their blogs here!