When we were in Cabo a few weeks ago, we had breakfast at a great little restaurant, Mama's. Mama's boasts they have the "Worlds Best French Toast". It's their version of Stuffed French Toast.

I wanted to recreate this dish! After reading the recipe, I realized I don't really have a flambe pan. Probably not a good idea to flambe in non stick! The only french bread in the freezer was baguettes. Not a good size for french toast. With stuffed french toast as my inspiration, this is my version of the "Worlds Best French Toast". Maybe not the world's best but we thought it was pretty darn good. 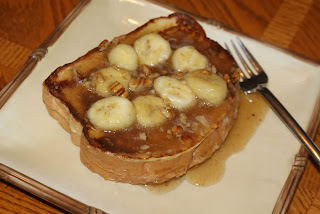 Spread cream cheese on one side of slices the bread. Make a sandwich out of the bread.
Whisk egg, milk and vanilla.Dip the bread in the egg mixture, making sure it is is coated well.

Melt 1 tablespoon of butter in a skillet over medium high heat. Once the butter is hot, add the bread and cook until golden brown, about 3 minutes. Flip and cook on the other side.

Melt butter in a skillet over medium high heat, stir in honey. Once combined, add cinnamon and pecans. Once the sauce is bubbling, add the banana and cook an additional minute or two. Don't overcook or the banana will get too soft.

Pour over French Toast. Garnish with powdered sugar, if desired.

I am linking this to Foodie Friday at Designs by Gollum and Fat Camp Friday at Mangoes and Chutney.
Posted by Julie at 6:00 AM