When I realized it was going to be my turn to pick the recipe for Sweet Melissa Sunday's in March, I immediately turned to Irish Soda Bread. A perfect March recipe and a bread we so enjoy. I made Irish Soda Bread for the first time last year. Melissa's recipe includes currants and raisins, while the recipe I made last year did not. Curious, I did some research on the history of Irish Soda Bread. I was interested to find out the ingredients in the traditional recipe. As it turns out, currants and raisins are a later addition to the traditional recipe.

The instructions in Melissa's recipe are to knead the dough lightly, adding a little more flour if necessary. I found this dough to be VERY sticky, so I chose to add a little more flour and use the dough hook on my Kitchen Aid. Much as I've tried, I've never mastered the art of kneading by hand. After kneading for a minute or two and adding a few tablespoons of flour, I still found the dough to be sticky. Rather than make this bread in round loaves on a cookie sheet, as Melissa suggests, I used a loaf pan. As I turned the dough into the pan, I was really hoping the bread was going to turn out. After all I was hosting and I didn't want to be posting about one of my flops!

I checked the bread after 30 minutes and it wasn't done. I continued baking in 5 minute increments until at 45 minutes the wooden skewer came out clean. After the bread cooled, I made a cup of Chai Tea and tried a slice. It's a delicious, hearty bread that would pair perfectly with soup, stew or even Corned Beef and Cabbage. 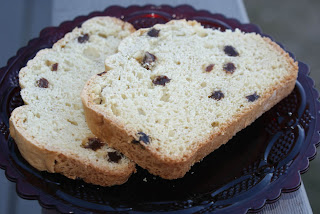 This is our SMS recipe for March 20th. Yes, I am posting a little early. You'll find the other SMS baker's results here on the 20th. I am also linking this to the St. Patrick's Day Blog crawl at Cuisine Kathleen's, Tempt My Tummy Tuesday, Tasty Tuesday's, Tuesday's at the Table.

From: The Sweet Melissa Baking Book
Yield: One 3-pound Loaf

Position a rack in the center of your oven. Preheat the oven to 350 degrees. Line a baking sheet with parchment paper or aluminum foil.

In a medium bowl, combine the raisins and currents. Pour boiling water over to cover and set aside to reconstitute. In a bowl of of electric mixer fitted with the paddle attachment, combine the flour, baking powder, baking soda, sugar, salt and cloves. Add the cold butter pieces and mix on low speed until the butter is the size of small peas. Add the caraway seeds, if using, and mix to blend. In a separate bowl, whisk together the egg and buttermilk.

Turn the dough onto a lightly floured work surface. Kneed the dough gently, until the ingredients are fully incorporated. Using a little flour, if needed, form the dough into one large round - or divide it in half to form two small rounds.

Place the round (rounds) on the prepared baking sheet. Using a sharp knife, cut the traditional "X" cutting about 1 1/2 inches deep into the top. Bake for 20 minutes, reduce the oven temperature to 325 degrees and bake for an additional 20 minutes for the large loaf, or 10 minutes for the smaller loaves. The loaves will be golden, and a wooden skewer inserted into the center wil come out clean. Remove to a wire rack to cool.

Last by not least, I am joining Lynn at Happier Than A Pig in Mud for her Celebrity Cook-along. Her cook-along is featuring the recipes of Ina Garten. I enjoy Ina's recipes and had a hoped to find the time to make a new one for this event but out of town guests and daylight savings time got the best of me. I'm linking to an earlier recipe I made, Ina's Granola Bars. If you haven't made them, give them a try. They're delicious!