Shortly after we were married my husband began calling me Sally. Where it came from, I am not sure but it stuck and it's become my nickname. Seemed only fitting to title this post, Sad Sally's Cupcakes.

Megan from My Baking Adventures chose this month's Martha Stewart Cupcake Club recipe, Lemon Meringue Cupcakes. The cupcakes were easy to put together and turned out beautifully. They have a beautiful lemony flavor and fragrance. It's the steps after this where Sally's cupcakes went south. I frosted 5 cupcakes with the Seven Minute Frosting. The two in the photo are the best of the bunch. You should see some of the others but I am not posting those. 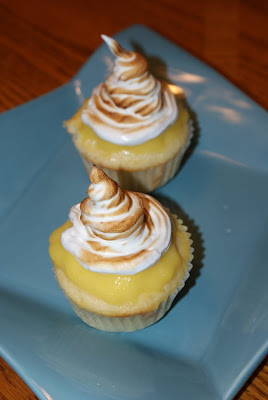 The cupcakes are topped with Lemon Curd and Seven Minute Frosting. Lemon Curd is on my list of Top 50 recipes. I can cross that one off the list. I love the flavor of this lemon curd. Since I only used a little bit of it, I am looking forward to finding other recipes to use the remainder.

If you follow my blog, you know taking a cake decorating class is one of my 2010 blogging goals. Recently I purchased a cheap piping bag. It came with 5 tips. Of course they weren't marked as to which tip was which. There was a star tip but I think it was too small for this frosting. As I was struggling to get the frosting in the bag and then struggling even more to pipe it on the cupcakes, I was thinking how much I wish I knew how to pipe frosting. This is another one of those recipes where my mother would have said, "You get an A for effort".

I really liked the flavor of these cupcakes. I would make them again with a lemon frosting or possibly the Seven Minute Frosting AFTER I learn to pipe.

Check out the posts of the other Martha Stewart Cupcake bakers, I know you'll find lots of cupcakes that aren't sad!