While shopping at Costco recently, my husband suggested we purchase brussels sprouts! Amazing! This is a guy who a year or so ago refused to even think about eating brussels sprouts.

I have a couple of brussels sprouts recipes that we love. There's this one, given to me by son and this one I found on the internet! I wanted to make something different this time. I found this recipe on 101 Cookbooks, Heidi Swanson's wonderful blog!

These are delicious and so easy to make! 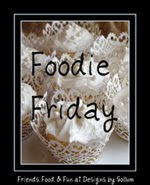 I am sharing this with all of the other Foodie Friday participants over at Designs by Gollum. Check them out, there's a ton of great posts. 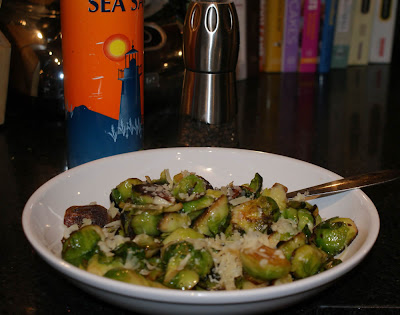 Wash the brussels sprouts well. Trim the stem ends and remove any raggy outer leaves. Cut in half from stem to top and gently rub each half with olive oil, keeping it intact (or if you are lazy just toss them in a bowl with a glug of olive oil).

Heat 1 tablespoon of olive oil in your largest skillet over medium heat. Don't overheat the skillet, or the outsides of the brussels sprouts will cook too quickly. Place the brussels sprouts in the pan flat side down (single-layer), sprinkle with a couple pinches of salt, cover, and cook for roughly 5 minutes; the bottoms of the sprouts should only show a hint of browning. Cut into or taste one of the sprouts to gauge whether they're tender throughout. If not, cover and cook for a few more minutes.

Once just tender, uncover, turn up the heat, and cook until the flat sides are deep brown and caramelized. Use a metal spatula to toss them once or twice to get some browning on the rounded side. Season with more salt, a few grinds of pepper, and a dusting of grated cheese.