For this month's Secret Recipe Club,  I was lucky enough to be assigned Debbie of Debbie Does Dinner Healthy.  Debbie is the hostess of Group C.  Thanks for all you do to make SRC a success.  I've been following Debbie's blog since I began blogging in 2009.  She has some great healthy and low cal recipes on her site!  Stop over and check them out.

I love potato soup but never thought about making sweet potato soup.  After making this recipe, I realized I've really been missing out. This soup is so good and the great thing is, it's healthy.  I did use the bacon, not a lot, but it really adds to the flavor.  I pureed the soup with my immersion blender, next time I will be using the blender instead.  It takes a while to puree this soup and the blender would be so much easier.

I love, love, love this soup.  One of the best soups I've made in a long time.  Thanks, Debbie for an amazing recipe, one I can't wait to make again soon!!! 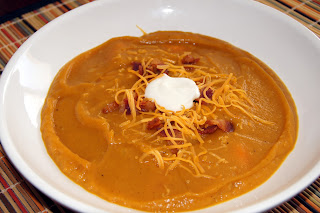 Saute desired amount of bacon. Save bacon grease for sauteeing.

Add onion, bacon grease, salt and pepper to hot large pan and saute until tender.  Add garlic, thyme, chili powder and cinnamon, cook for a couple of minutes.  Add sweet potatoes, broth, vinegar and about 3 cups of water.  Season with more salt and lots of pepper.  Bring to a boil, reduce heat and simmer for about 25 minutes.  When potatoes are tender, puree with an immersion blender or carefully add to a food processor.