It's Secret Recipe Club time again! Last month, when I said it was my fourth month participating, I was wrong. It was my sixth month. WOW, I can't believe it was June when I started. I've met some great bloggers and cooked up some delicious recipes.

My first month, I was assigned the Hagis and the Herring and made their Crunchy Roasted Potatoes and Carrots. Month two was Creative Culinary and her beautiful Lavender Martini. August was month three and The Wednesday Baker's Wild Blueberry Muffins. September was fellow Omaha blogger Biking and Baking's, Rosemary Squash Soup. Just in time for football season, October brought me Sticky Chicken Wings from Lavender and Lime. November was a delicious holiday breakfast idea, Eggs en Cocette from Searching for Spice.

For December, our hostess Tina of Mom's Crazy Cooking suggested we find a holiday recipe to share. Having not tired of eating pumpkin, I was drawn to Pumpkin Alfredo from Veggie Converter. Kristi has amazing vegetarian and vegan recipes, most of which I found would be easy to change or convert if you aren't vegetarian. Although we aren't vegetarian, we try to eat at least one meatless meal a week. To lighten the recipe up a little, I decreased the butter and increased the milk. The pasta was still rich and creamy.

When Tim saw what I was making, he questioned the peas. I used the small canned peas. They added nice flavor and color to the dish. As I was putting the finishing touches on the dish, I was wishing I had some fresh sage to add. I think sage would add a nice finishing touch. We enjoyed this hearty pasta dish. 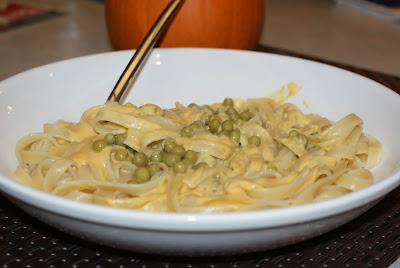 Meanwhile, brown garlic in a small saucepan over medium-low heat. Add butter and cream cheese, allow to melt partially. Add pumpkin and stir. Mix cornstarch with a bit of the milk to create a slurry. Add slurry and remaining milk to pan. Cook a few more minutes, stirring regularly, until thickened. Add Italian seasoning and House seasoning, to taste.