Many times when you read the list of ingredients for a French toast recipe, you'll find it calls for Challah bread. I never seem to be able to locate it and always use a thick toast of some sort. Last weekend while shopping at Trader Joe's, I was thrilled to find Challah.

Baked French toast recipes are perfect for this busy holiday season. You can make it the night before and bake it the next morning. We almost always have some sort of overnight dish on Christmas morning.

My favorite part of this recipe is the raspberry syrup. Yummy! It reminds me of eating at one of those pancake houses where you have all of these flavors of syrup to choose from but tastes so much better!!!

We liked but didn't love this recipe. The 1/4 teaspoon of cinnamon wasn't nearly enough. I added more, maybe up to a teaspoon but still thought it lacked cinnamon flavor. I am going to make this recipe again for Christmas using a local bakeries French toast bread which is loaded in cinnamon. 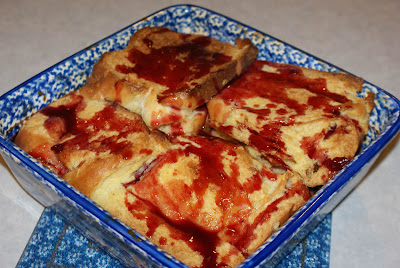 Our host for this month seems to be MIA, so I'll be sharing the recipe with all of you.
You'll find the links to the other bakers French toast here!

Generously butter the sides and bottom of an 8 inch square baking pan. Cut the loaf into 1 or 1 1/2 inch slices and arrange in the pan.

In a large bowl, whisk the eggs until the just break up. Add the half and half, milk, vanilla, and cinnamon. Whisk until combined. Pour the mixture over the bread slices. Cover tightly with plastic wrap and refrigerate for at least 8 hours or overnight.

Preheat the oven to 350 degrees F. Use your fingers to flip each bread slice over, making sure to coat the entire surface with liquid. Arrange the bread in an overlapping pattern, sprinkle it with almonds, and bake for 35 to 40 minutes, or until French toast is golden brown and the mixture is puffy. Set the French toast aside to cool in the pan.

Make the Raspberry Sauce
In a small saucepan, toss the raspberries with the sugar. Cook the mixture over low heat until the berries start to break down, about 10 minutes. Strain the cooked raspberry sauce into a bowl to remove the seeds, then stir in the lemon juice.

Pour the raspberry sauce directly over the warm French toast (or serve it alongside in a gravy boat) and serve immediately. Top with whole fresh raspberries, if you have any left over.
Bakers Note: If you are interested in a creamier bread pudding type recipe, increase the half and half to 1 cup and the milk to 3/4 cup. And any hearty, crusty white bread makes a great substitute for the baguette.
Posted by Julie at 5:00 AM