If you follow my blog you know I use my Slow Cooker a lot. Nothing's better than coming home after work and having dinner ready to go. As you continue to use your slow cooker you learn some dishes are more suited to the slow cooker than others.

Until recently, I had never used my slow cooker for a dessert. A few weeks ago during one of our first camping trips, I tried this Apple Crisp. Wow, dessert does work in the slow cookert!! After my first success, I found this recipe for Crock Pot Chocolate Cake. I never would have thought a chocolate cake would bake in the slow cooker but it does. Don't expect the same texture as a cake baked in the oven. The texture of a slow cooker cake is more like a flourless chocolate or pudding cake. A trick I learned when I made the Apple Crisp is to take a towel or a few paper towels and put them under the lid. You'll find this absorbs the steam and moisture and helps the desserts to bake. If you're a camper, like I am or if you don't want to heat up your oven this summer, give this cake recipe a try! 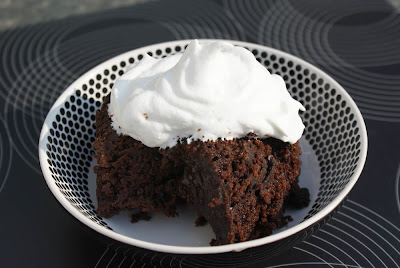 Spray a 4 quart crockpot with non-stick cooking spray and set aside. In a large bowl, combine the cake mix and pudding mix. In a medium bowl, beat the eggs with the water, then add the sour cream and oil and beat until smooth. Add to the dry ingredients and beat well. Stir in the chocolate chips.

Pour into crockpot. Cover slow cooker and cook on low for 6-8 hours, until top springs back when touched very lightly with finger. 8-10 servings

I am linking this to Tasty Tuesday's, Tempt My Tummy Tuesday and Tuesday's at the Table.