There's something hearty and almost meaty (or so I tried to tell Tim) about Wild Rice Soup. When I told Tim I was making Wild Rice Soup, he said chicken and wild rice soup? I said no, besides the bacon, there's no meat in this recipe but aren't you happy it does have bacon it? Actually lots of bacon. This recipe called for 1 pound of bacon, I scaled it down to 1/2 pound. Seriously, a pound of bacon?!!

I cooked the rice for this in my rice cooker. It produced perfectly cooked wild rice in about an hour. I don't know about you but I always have trouble cooking rice on the stove top. I love the depth of flavor the red wine adds to this soup. Whenever we have a little leftover wine, I freeze it in ice cube trays. Then when I need a little wine, I just toss in a cube or two. Like many soups, this one is better on day two or even day three. 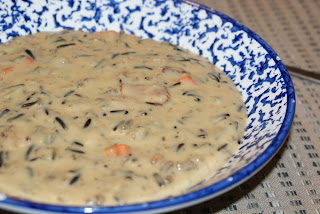 Prepare wild rice as directed on package. While that cooks, fry bacon until crisp. Remove bacon to drain, then crumble. Reserve 3 T for soup. Saute pepper, celery and onion in bacon grease until soft. Add remaining ingredients and simmer on the stove for an hour or more (tastes better the longer it simmers).

I am linking this to Foodie Friday at Designs by Gollum , Souper Sunday at Kahakai Kitchen
and Fat Camp Friday at Mangoes and Chutney.
Posted by Julie at 5:00 AM