I made Alton Brown's Granola to take on our Yellowstone vacation this summer. The granola was delicious but not clumpy enough for us. Since I've been home, I have had plenty of time to watch Food Network. Ina Garten's show featured Granola Bars which look very similar to Alton's Granola recipe, except these are bars.

Preheat oven to 350 degrees. Spray an 8 x 12 baking pan with cooking spray and line it with parchment paper.

Toss the oatmeal, almonds and coconut on a sheet pan and bake for 10 - 12 minutes, stirring often for even browning. Toss the mixture into a large mixing bowl, add the wheat germ and cinnamon. Mix well.

Reduce the oven temperature to 300 degrees.

Place butter, honey, brown sugar, vanilla and salt into a small saucepan. Bring to a boil over medium heat. Cook, stirring for a minute. Pour over the oatmeal mixture. Add the fruit and mix well.

Pour into a prepared pan. Using a small piece of parchment or wax paper, lightly press the mixture into the pan. Bake for 25 to 30 minutes or until light golden brown. Cool at least 2 to 3 hours before cutting into squares.

Store in an airtight container. 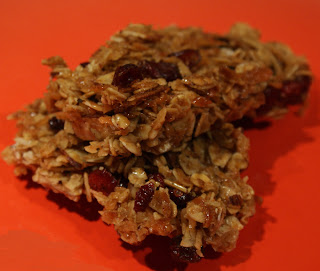 My notes on this recipe:

Ina's recipe called for dates and apricots, I didn't have these but had raisins, so I substituted them. Also, I added cinnamon for a little extra flavor. I also felt that these didn't stay together as much as I would like. I need to research what might hold them together a little better next time.
Posted by Julie at 12:24 PM