Despite a photo that doesn't make me want to try this recipe, this is a delicious soup.  August and September is  Hatch Chili Pepper time.  Our local Hy Vee store always has an ample supply.  Hatch peppers are meant to be roasted and used in soups, salsa's and other main dishes.

Having roasted a few extra ears of corn, I was interested in finding a recipe that used the corn and the chili peppers.  I like to roast the peppers on the gas grill but this time, I used the oven.  I set it for 400, on the convection roast setting,  roasting them until charred about 20 minutes.  After taking the peppers out of the oven, I put them in a paper bag for a few minutes and the skins pull off nicely.

Many cream soups and chowders use heavy cream.  I was searching for a lighter option for thickening.  I found several recipes using corn meal for thickening.  What a great idea!  Why didn't I think of that?  I used 3 tablespoons mixed with water and stirred into the soup after completing the cooking time. 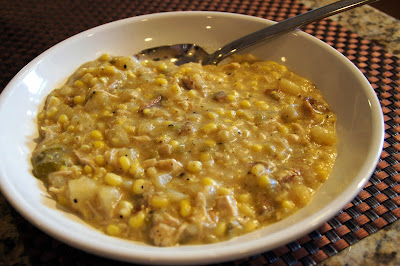 Directions Fry the bacon in a large saucepan over medium heat until brown and crisp. Remove the bacon with a slotted spoon and reserve. Stir the onion into the bacon drippings and cook until the onion is soft and translucent, about 5 minutes. Puree 1 cup of corn with 1 cup of milk in a blender. Pour the mixture into the pan and add the remaining milk and corn along with the potatoes and 1 teaspoon of salt. Reduce the heat to medium-low and cook 10 to 15 minutes, or until the potatoes are fork-tender. Stir in the cream and the green chile. Add salt and pepper, to taste. Ladle the chowder into bowls, garnish with chives and the reserved bacon, and serve.
Posted by Julie at 6:44 AM