Our friends Karen and Larry are visiting this weekend. When I read this week's SMS recipe, I knew it would be the perfect dessert for Saturday night's dinner. Chocolate and Raspberries...YUM!!

This recipe is fairly simple to prepare. It doesn't have a lot of ingredients or a long preparation time. I had a hard time deciding when my eggs had reached soft peaks. I think I stopped before they had reached that point. As I folded in the first half, they seemed really runny. At that point, I decided to continue. As I combined the eggs with the chocolate mixture, the texture was strange. Almost lumpy but not actually lumps. Did some of my eggs cook when combining with the chocolate? I had one of those "Oh No" momemts where I thought this was going to be a flop. I used a 9" pan, which was too big. My torte was thin with raspberries poking throught. As well I think I should have cooked it for a shorter time. The texture was almost crumbly. Despite the texture and how thin it was, the dessert was delicious. I would have liked it with a small scoop of vanilla bean ice cream. 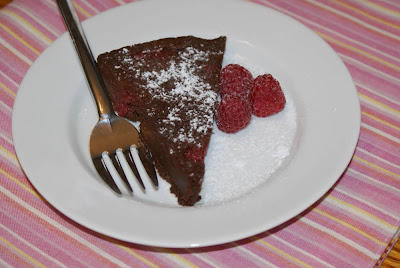 Thanks to Jennifer of The Rookie Baker for choosing this week's recipe. You can find the links to take a look at all of the other SMS baker's torte's here.
Posted by Julie at 11:11 AM