Is there a help group for cookbook addiction? If so, I think I need to join. I haven’t done a cookbook count lately but I know I have over 100. I started blogging so I would use recipes from my library of cookbooks. So what do I do? I just keep buying more cookbooks. I really like my recent cookbook purchase, Not Your Mother’s Slow Cooker. I’ve made three recipes from this book and they’ve all been a hit. Beef Stew, which I liked and Tim thought was okay. A wonderful Chicken with Beans which I forgot to photograph. Sometimes we’re so focused on eating, we forget the camera until it’s too late. We forgot to photograph this recipe as well but snapped a quick shot of the one leftover thigh. Not the best picture but you get the idea.

I made a few changes to this recipe. Because it was cooking all day, I wanted to have plenty of liquid. I added a little more beer and some chicken stock. I also added potatoes and would have added carrots but I didn’t have time to peel before work. I found this recipe interesting because it used Herbs de Provence. I wasn’t sure exactly what that was so I did some reading. I found several recipes, some with lavender and some without. I like to cook with lavender but I wasn’t convinced the floral flavor was what I wanted for this chicken. My spice drawer contained everything except the savory, so I made my own version of the herbs. This chicken was delicious. It has a nice hint of beer and a beautiful herb flavor. 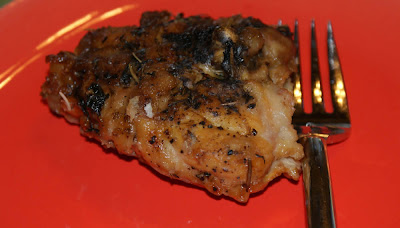 Put the flour on shallow plate or a pie plate. One piece at a time, dredge the chicken in the flour, coating both sides and shaking off any excess.

Drizzle the olive oil into a large skillet over medium high heat. When it begins to sizzle, add the chicken, skin side down and cook until deep golden brown on both sides, 5 to 7 minutes per side. Transfer the chicken to the slow cooker. Add the beer and chicken broth to the skillet and bring to a boil, scraping up any browned bits stuck to the pan. Pout over the chicken. Sprinkle with the salt, pepper and herbes de Provence. Tuck the bay leaves among the chicken pieces. Cover and cook on HIGH 8 to 9 hours.

I am linking this to Tempt My Tummy Tuesday , Tuesday's at the Table and Tasty Tuesday's.
Posted by Julie at 6:32 AM