A couple of week's ago I read Susan's post that she was hosting this round and looking for people to join her team. I signed up and joined her team. We're baking for Dan. Dan is the boyfriend of the grandaughter of a customer of Susan's and a 1st Lieutenant in Iraq. 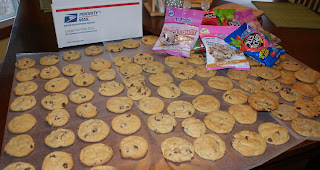 I baked 6 dozen chocolate chip and 4 dozen oatmeal raisin. I also included a few bags of hard candies for the guys to enjoy. It made me feel so good to be able to do a little something for someone who sacrifices so much for our country.

I plan to bake in every round I can. If you have an extra afternoon and want to show a soldier how much you appreciate all they do, stop by BakingGals, sign up and join a team!
Posted by Julie at 7:16 AM