Gingerbread Cupcakes...hmmm? Gingebread, Gingerbread Cookies, Gingerbread Houses but Gingerbread Cupcakes? I am not a big Gingerbread fan but it is one of those signature holiday dishes, so knew I was baking this one. I really wanted to like these cupcakes but the truth is, I didn't. Now that wasn't really because of the flavor, it was because they were DRY!!! I followed the recipe exactly! As I was scooping the batter into the cupcake pan, I thought it seemed really thick. I even baked them for less time than the recipe called for. With some of the earlier Martha Stewart Cupcake bakes, I felt like my cupcakes were overbaked. I bought an oven thermometer to make sure the temperature was right on. What happened? I am anxious to read the other Martha Stewart Cupcake baker's blogs to see if I am the only one who experienced dry cupcakes. Now I am trying to decide what to do with the cupcakes because while on the first day they were dry but edible, on the second day, they're too dry to eat. Maybe some sort of bread pudding?

Thanks to Kayte of Grandma's Kitchen Table for choosing this great holiday recipe for this month's bake. You can find the links to all of the other Martha Stewart cupcake baker's here! 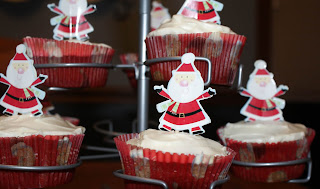