Besides being a yummy treat, Girl Scout cookies take me back to my childhood. I was a Girl Scout and do have fond memories of putting on that uniform and going door to door selling them. Do Girl Scouts even wear uniforms today? I know there are a lot more varieties of cookies today then back in the 60's when I sold them.

I always buy at least a couple of boxes of Thin Mints, the best selling cookie. Also reminiscent of my childhood is a recipe for Mint Brownie Pie, using Thin Mints. After rifling through my accordion file under Pies for the recipe and coming up empty, I felt that feeling in the pit of your stomach when you lose or break something important to you. The last time I remembered making the recipe was at the lake a few years ago. One more slot to look in, could it be in Frozen Pies? Even though it's not a frozen pie, refrigerated yes, frozen no. Yes, there it was, filed in Frozen Pies by mistake. 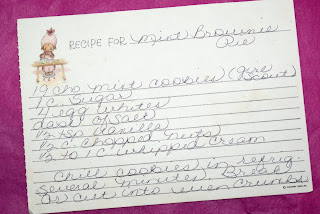 I am not sure of the origin of this recipe. It dates back to the early 70's. The recipe card was part of what must have been one of my first recipe books. My accordion files contain several of these handwritten recipe cards. This week, I was trying to remember the name of the little girl on the recipe card. You know that feeling when you know you should know the name and just can't come up with it? I did the Alphabet memory trick...A? No B? No, nothing was jogging my memory. I tried googling dolls from the 70's, although I wasn't really sure she was a doll. Today I reached for my husbands reading glasses, hoping it would really magnify the small print just under her image. Just as I was holding the glasses over the print, it came to me...Betsey Clark. Betsey Clark was an artist for Hallmark cards who created this little girl. 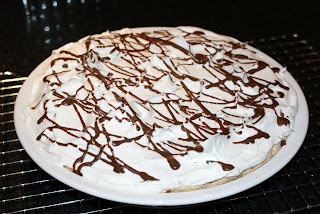 Chill cookies in refrigerator several minutes. Break or cut into even crumbs. Beat egg whites and salt together until peaks form. Gradually beat in sugar until stiff peaks form. Fold in cookie crumbs, nuts and vanilla. Spread into buttered 9" pan.

Bake 35 minutes at 325. Once pie has cooled, spread on whipped cream. Chill in refrigerator 3 -4 hours before serving. 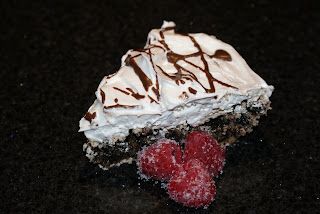